The name Estero is Spanish for estuary – where the river meets the sea – and until the 1970’s much of the settlement and development in Estero was near the Estero River, then called Estero Creek. 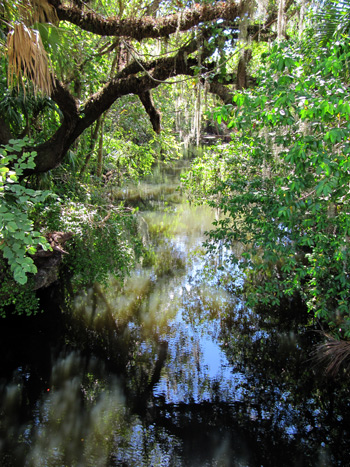 In the early days, Estero was a major citrus producing area. The first homesteader is reported to be Gustave Damkohler who in 1882 farmed citrus along the Estero River and then used the river to ship his harvests north via the Gulf of Mexico.

Estero’s most noted pioneer was Cyrus Teed, leader of the Koreshan Unity which believed the universe existed within a giant hollow sphere.  He and some of his followers began settling along the Estero River in 1894.  Gustave Damkohler joined the group and donated his 320 acres of land to the Unity.

During this time, the Koreshans opened a post office, store, blacksmith and saw mill; established schools for all those who wanted to attend; built an Art Hall for their symphony orchestra and theater group, and gathered exotic vegetation from throughout the world which they planted on their grounds.  Eleven remaining historic structures are being maintained at the Koreshan State Historic Site.

Not all the homesteaders of that time were happy with the Koreshans. In 1901 Mr. and Mrs. F. M. Hendry deeded land for the Estero Creek School with the restriction of prohibiting all things Koreshan.  This school operated until 1903; there is no record of why it closed.