The meeting started with District 3 Lee County Commissioner Ray Sandelli introducing himself to the Council and residents.  Sandelli was appointed by Governor DeSantis last month to fill the vacancy left as a result of the passing of Larry Kiker.  Sandelli stated he is a native of New Jersey, served with the Navy’s Blue Angels, has a 40-year career in real estate and has 3 children.  He thanked the local mayors for meeting with him to provide their guidance. 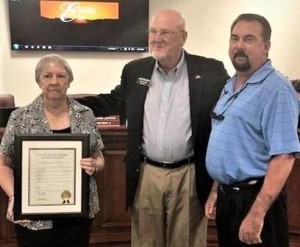 Councilmember Jim Wilson presented a proclamation which was bestowed upon Robert L. King to King’s wife Janet and son Richard. The proclamation related the gratitude of the residents and the Village Council for King’s many contributions to Estero.  King, who recently passed away, had served on the Village’s Planning & Zoning Board for two years along with being engaged in many community service activities for a number of years for the benefit of all Estero residents.  (Proclamation) 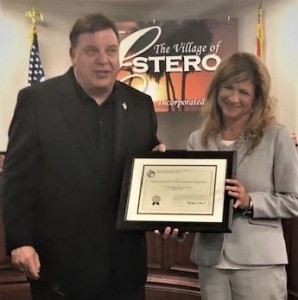 The Government Finance Officers Association presented the Distinguished Budget Presentation Award to the Village of Estero for its comprehensive financial report for the Fiscal Year ending September 30, 2018.  This national award is presented for the highest level of performance in governmental budgeting.

In addition, when this award is granted to an entity, a Certificate of Recognition for Budget Preparation is presented to the individual/department designated as primarily responsible for this achievement.  Mayor Bill Ribble is shown presenting this certificate to the Village’s Finance Director Lisa Griggs Roberson.  This is the third year in a row that Lisa has received this award.  (Certificate)

Public Comment: Debi Osborne, Director of Land Protection, Conservation Foundation of the Gulf Coast, spoke about the importance of purchasing the River Oaks Preserve which is approximately 10 acres located at the eastern end of E. Broadway.  She suggested using impact fees to purchase this preserve.

Again this year, the Village will have the lowest tax rate in southwest Florida, the lowest ratio of staff to population (11 full-time staff members supported by contractors and other partnerships) and a reserve of 12 months of operating budget.  (Presentation)

Council voted to continue the first reading of this ordinance to refer it to the Design Review Board for them to review a number of issues including the pattern book for the restaurant, landscaping, parking, stacking of vehicles and architecture.  The ordinance pertains to amendments to the Estero Town Center Commercial Planned Development to construct a Burger King fast food restaurant in the southeast quadrant of the intersection of Corkscrew Road and Three Oaks Parkway.

Council voted to approve a $59,700 contract with Banks Engineering to perform a number of design services for the Water and Sewer Expansion Project.  A portion of Estero homes are still on septic tanks, which can contaminate the groundwater and Estero River. This contract will determine the preliminary design for what is necessary to convert from septic tanks to the sewer system as well as the cost of converting from septic to the sewer system. (Summary Sheet)

Council voted to continue this item until further details are obtained.  Historically, Lee County has had separate agreements with each of the municipalities (City of Bonita Springs, City of Cape Coral, City of Fort Myers, City of Sanibel, Town of Fort Myers Beach and the Village of Estero) specifying their share of the 5-cent and 6- cent local option fuel taxes.